Last Wednesday night in Los Angeles, a sold out venue at The Wiltern Theater hosted eager fans for the live screening of the film Everybody Documentary from rapper Logic’s latest album Everybody. The film was followed by a live Q&A hosted by writer Brain Wayne Foster and panelists included: Logic, album executive producer, 6ix, mixer and recordist, Bobby Campbell, and the documentary co-directors, Justin Fleischer and Mike Holland. Everybody Documentary provides yet another behind the scenes look at the life of Logic, but this was the first feature length film presented by the artist. For 22-year-old co-director Mike Holland, having the Everybody Documentary as his first feature film, this was BIG.

Mike and Logic met in 2012 through mutual friends in Maryland. The “day in the life” style visual collaboration began with Mike capturing footage from Logic’s 2013 Welcome to Forever Tour when Logic was still producing mixtapes before being signed to Def Jam. While enrolled as a full time student at Ithaca College pursuing a major in documentary production, Mike was not always able to film, so Logic recruited Justin to help lead the filming of his career. It wasn’t until Mike graduated from college that he and Justin started working together on Logic’s 2016 Endless Summer Tour.

With Everybody, filming continued and the duo set out to make another documentary having no idea the scale at which it would be delivered to Logic’s fans:

“When we first got approached about this documentary we didn’t really know how big of a project it would end up being. We thought it was going to be a twenty minute short film that we would put out on YouTube.”

Mike and Justin started filming in November 2016 stationed at Logic’s home for the album creation process, working for six weeks until Christmas. Mike then travelled back home to the east coast, as Justin filmed the progression of the album on and off for another four months, capturing additional studio sessions, some of the classical music sessions, and interviews.

The film opens with Logic speaking on his unwavering support of this album: “I’m not sorry for making this album. I made this album from a place in my heart of love. I’m black and I’m proud as sh*t… and I love my fans.” Bold soundbites like this cement the film in its relation to the album in addition to many more insights from Logic on his motivations and need for his latest work. By interviewing the different album collaborators and Logic’s friends and family, Mike and Justin connected the film theme with the album theme—different perspectives stemming from the many lives associated with one man, the album’s main character, Atom.

Logic’s close collaborators have become his friends so much so that many relationships are much deeper: “We’re all a close family,” says Mike. Having this close bond, Mike’s biggest challenge was not interfering during moments that he normally would as a friend. The bond between filmmaker and character allowed for those being filmed to comfortably open up to Mike and Justin on camera. After recording the song “Anziety,” Logic takes a moment to address the camera becoming very emotional about how grateful he is to have come so far in his life after battling heavy issues his album centers on such as anxiety, and for being so fortunate today unlike his childhood. This intimate moment affirms years of friendship and Logic’s longing to connect, relate, and inspire his fans. 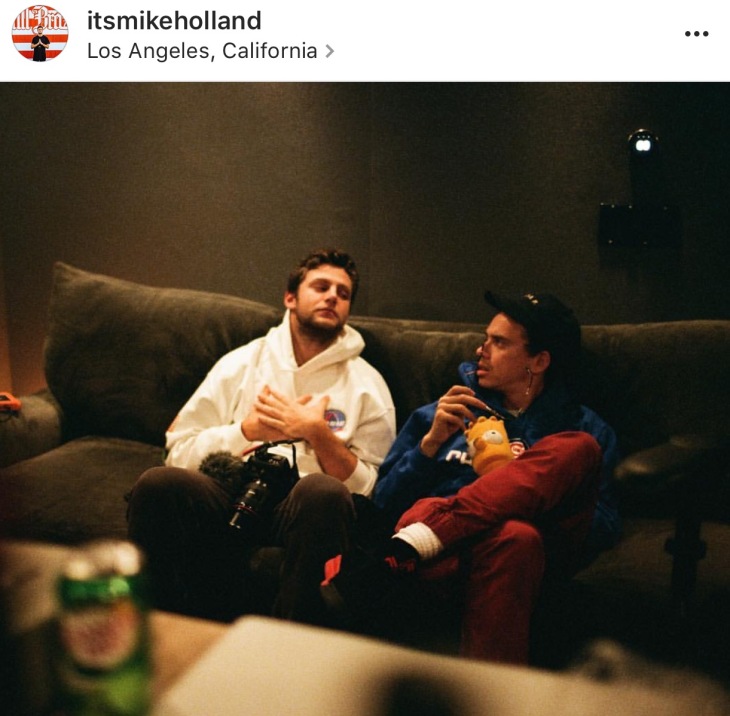 Everybody’s primary theme is the promotion of equality and that everyone regardless of race, religion, creed, and sexual orientation is great. The album sternly takes a stand on many political issues, and Logic does not shy away from providing an honest reflection of his life.

Looking at Mike’s previous work, he is one of the perfect filmmakers to present an honest film that accurately and respectfully portrays someone’s life while addressing a political issue. His last documentary Stateless gave viewers a look into the life of a Syrian refugee family living in Detroit, Michigan while also interviewing those strongly opposed to Syrian refuges as neighbors. Mike’s upcoming project, Seven Dates With Death, which is co-produced with his colleague Joan Cheever, is about the life story of Moreese Bickham, the oldest survivor of death row. Having been born and raised in the south enduring harassment from the Ku Klux Klan (KKK), Bickham killed two members to save his life then faced the possibility of death for fourteen years. A portfolio of political pieces, yet Mike doesn’t seek them out. His approach to new work is genuine sympathy and curiosity,

“I think any artist should focus on the art that they care about most… I don’t think that I could put all this effort into something if my heart isn’t there.”

What started out as a 20-minute documentary intended for YouTube distribution has now been the number one video on iTunes, received a massive screening at one of the nation’s notable theaters, and has skillfully handled the behind the scenes delivery of Logic’s most raw and inclusive album to date. Mike and Justin have been leaders of the mission to exceed the expectations of some of the world’s most dedicated fans, The RattPack.